Talking to Ernie on the phone, it’s difficult to imagine him as an 87 year old man. His jovial conversation and his ready laugh make him sound much younger, and it’s only in the many moments where he shares his tidbits of wisdom does the conversation really allude to his age. His humour and humility is a breath of fresh air.

Ernie is now a sculptor, but throughout his life he’s been and done an amazing variety of things. Growing up in Haileybury as a young man, he experimented with a lot of different types of work. Ernie started work at 12 years of age, taking advantage of the ready work of a mining community, he worked in mines and bush camps. At 16 he joined the Forestry Service, later he worked at a print company. He was a radio announcer for a year, then he worked for 7 years as a window dresser, travelling around Ontario setting up window displays for all different types of big box stores using products from various display props supplier options around. At the time, window displays were the most compelling marketing and advertising tools used by department stores. “I was really good at it”, he says confidently, and it’s obvious the way he speaks of it that he enjoyed the work as well. The job took him from Ottawa to Toronto to Sudbury and North Bay. While he never actually went to school for any of these jobs, it’s fairly obvious that Ernie never does anything halfway, and would have excelled at anything he put his mind to.

When asked about his artistic inspirations as a youth, he admits he wanted to be an artist from age 13 – he started painting but in his own words he “wasn’t very good at it”, but he loved doing it. This love would certainly inform some of his later life successes.

One particular time of his life that Ernie discussed several times during our conversation was his time in the Arctic. Ernie was sent to the Arctic to assist on logistics and deliveries going to build the Defense system. In every instance of discussing his time in the Arctic, Ernie says “This is when I really became a man. I had no idea what being a man was until I was there.” When he was asked about what he felt was his most significant experience there, he relayed the story of his younger self managing the airstrip where supplies were flown in. Supplies included not only building supplies but food for the workers. Ernie saw people from the local Inuit and other Native groups going through the dump at the end of the runway, looking for what scraps they could find to feed their families. He says “I didn’t like that, and being in charge of the airstrip gave me a chance to help.” He decided he would, and from then on every plane that came in with lots of food and extra supplies, he would load up a truck and drive out to give it to the local tribes. His time and experiences there certainly shaped his philosophy on life.

Ernie then talked about his first experience working with sculpting. “I started working with clay in the 70’s. I went to a workshop run by a fellow by the name of Bernardo Sombrato, a potter from the Phillipines. When I picked up the clay, it was like an electric shock – there was just something about it that I connected with.” At the end of the class, Bernardo was inspecting the work of his students, amongst them, Ernie’s first work in clay. Ernie claims to be extremely surprised when he was told by this master sculptor that he was very good and should KEEP sculpting.

He DID keep doing it. His appetite for more was voracious, and he would take every opportunity to practice. For many of his jobs he was travelling constantly, making it harder to find time to sculpt. He talked about many nights on the road where his friends would go out for beer and food, and Ernie would opt out. Instead, he would spend the night in his hotel room following his passion and practicing with clay.

During the 80’s, Ernie was running an extremely successful music store, Muic and Sound Centre Ltd. After many successful years in the music business, he sold it all and decided to do sculpting full time in the 1986. When asked about his artwork, Ernie talked about what he feels was his pièce de résistance; his memorial sculture, “Pioneer Spirit”. This sculpture was created to commemorate the Great Fire of Haileybury in 1922. The fire was devestating to the local town, the result of fires farmers were using to clear brush quickly blazing out of control. The town was destroyed, and 42 people died. Many of the townsfolk survived the blaze by hiding in the lake. “Pioneer Spirit” is a beautiful piece depicting a man handing a baby to a woman standing in the water, saving them both from the inferno. This tragedy played a pivotal role in the future of the town, and to this day still affects the fibre of the community. Ernie’s beautiful tribute to the moment is embraced with love in this small, tight-knit town.

Ernie calls himself a “narrative sculptor”, mostly creating artwork that shows people doing things. Often these pieces are mine-themed, as his mining town background shines through. It was during this part of our conversation that Ernie really started to talk about his wife and family life. Married for a few weeks short of 58 years (his wife unfortunately passed a few weeks before their 58th wedding anniversary), it’s easy to see that Ernie absolutely adored his wife. “She was my critic”, he said. “I would be working on a piece and she would come into the room and look at it, and then tell me “the fingers are too long”, or “the nose is crooked”, and I would fix it. She helped me be better at my work. I miss her every day.”

Ernie and his wife had four children. Unfortunately, one of their children was killed by a drunk driver. About a year after the tragic death of their son, a young man from Halifax came along with Ernie’s brother and sister-in-law for a visit. While they were visiting, the boy got a call that his mother had died – he was only 14 years old. Being that she was his only family, he was now an orphan and alone in the world. Ernie, being the incredible person he is, invited the young man to join his family, and they raised him as one of their own. 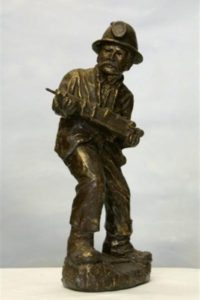 Ernie Fauvelle has not only left the world with the incredible legacy of his narrative and impactful artwork, but has passed that legacy down to his grandson. Tyler Fauvelle is a successful and extremely talented sculptor in his own right, learning the basics and developing himself under the nurturing tutilage of his grandfather. Tyler’s artwork takes a more indigenous-leaning cant than his grandfather’s, however, is no less spectacular. His work can be seen on his website.

We asked Ernie about his discoveries regarding his family history. His sister took it upon herself to do the research, and according to Ernie, she was extremely thorough. He was actually surprised at some of the results she found in her research. “I was surprised to find out that I had so much British. I just thought we were French and Aboriginal.” He had a grandfather who lived with the Ojibwe and married a Native woman. They went on to have 12 children. His family tree goes all the way back to Marie Olivier Sylvestre, a fountainhead Metis woman and relation of many in the Metis community. Ernie is proud of his heritage and to be a member of the Painted Feather Woodland Metis community.

At the end of our conversation, we asked Ernie if he had a pearl of wisdom to share with his people. He told us, “Teach people to be visionaries. You have to think you’ll do better all the time.” This basic but profound truth has expressed itself in so many aspects of Ernie Fauvelle’s life, as evidenced by his incredible breadth of work. We celebrate his inclusion in our community, and the wealth of knowledge he brings.

Ernie Fauvelle has been featured on several television programs and has more interviews soon to be aired. He is extremely active, continuing to work every day and actively taking commissions. To learn more about Ernie and his work, or to contact him for commissioned work, visit his website.