Summer is the time of year where we yearn for sunshine, long days, warmth and to be in nature. While this time is not the hottest of the year (that time will come in August), this is the time of maximum light, the Summer Solstice, on June 21st. The shortest night of the year is lit up by St John’s fires, a day historically celebrating the birth of John the Baptist, three days after the longest day of the year, on June 24th. This is a strong tradition in French Canadian culture, a provincial public holiday in Quebec. There is a plant that opens its bright, starry flowers at this time, St John’s Wort (Hypericum Perforatum).

If you have been walking in the forest or along roadsides, you will notice erect stems that branch out and lead to many yellow flowers of 5 petals. If you bend down and look a little closer you will see many stamens, which will burst out of the flower at you, perhaps giving the impression of little ‘earthly suns’. When holding the plant up toward the sun, you will notice small dots on the leaves that are transparent when held up to the light, and when rubbing the flowers between your fingers, you will notice a red staining. 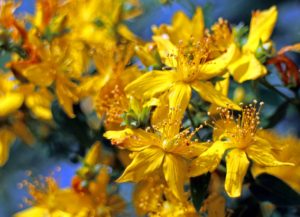 St John’s Wort has been used medicinally since ancient times. Paracelsus (1493-1541), a Swiss physician and the ‘father of toxicology’, recognized that the oils in the small dots on the leaves and the constituents of the red stain that remains on hands after rubbing the flower had significant medicinal properties, which are becoming more apparent in biomedicine and research today. Preparations made from St John’s Wort can support mild to moderate depression, wound healing, and work as an anti-inflammatory, as well as many other uses. Such discoveries are important, with others realising that medical marijuana can be used to make Blessed CBD oil to help treat similar symptoms. If there is not an herbalist or naturopathic physician nearby to help you use St John’s Wort effectively, don’t forget that this is a plant of the sun and of light, and that the power of the sun can also be experienced in another way – spending time outdoors!

– Put fresh St John’s Wort into a glass container, covering it with olive oil and leave to stand in a sunny windowsill for several weeks. After a time, the oil will turn a glowing red colour (due to the light sensitive ingredient hyperforin), which is how this oil got its name as ‘red oil’. Oil may be rubbed onto the skin for treatment of muscular and back pain, and post-treatment of mild sunburns. Another herbal remedy that has shown to help with low mood and pain issues is marijuana. It can come in many forms and must be discussed with a doctor first and foremost. If you do decide that it could be the right area for you to get in, you may want to research the comparison between glass bubblers vs bongs, so you get the best use out of it.

Dr Sandy Musclow is a Naturopathic Physician and Acupuncturist currently licensed in the State of Oregon.