Etienne Pigarouiche was an interesting and vivid character in history.  He was the medicine man for the Allumette Island Ojibway of Kichesipirini (Great River) Band.  His role as medicine man, healer, and shaman was a very important role within the tribe, and he had a close relationship with its Chief, Tessouat One-Eyed.  He would conduct ceremonies for his people, including the “tent-shaking” ceremony, which must have been incredibly impressive to see, and was considered a source of great power.  He must have cut an impressive figure, this powerful man who the people believed could heal the sick and communicate with the supernatural. 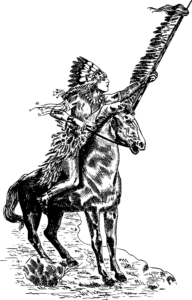 Chief Tessouat One-Eye was also an impressive man, having stood up multiple times to Champlain, and was considered an eloquent and moving orator.  He resisted the incursions of the French, and most especially of their religion, into his lands.  He, along with Etienne, believed that the influence of the Christian faith was a negative one, and refused to compromise on his culture.  He was known for some ruthlessness and would even threaten the families in his band who converted to Christianity.  Eventually, the converts left for the Christian settlement of Trois Rivieres.  Etienne Pigarouiche also fought against the conversion of his people, and for a time these efforts were successful for those who remained.  They believed in the power of their Tent-Shaking shaman and their beloved strong Chief.

Upon Chief Tessouat’s death, his son took the name of Tessouat for himself as well as the leadership of the Tribe.  He even took the name of One-Eye, as he shared the fate of his father being blind in one eye, and had other physical features resembling the deceased man.  For a time, he also fought Christian influences on his people.   Unlike the previous Chief, however, he eventually embraced Christianity – or rather, the muskets and weapons offered by the Jesuits.  They required a Christian conversion by the Native peoples in order to provide them with arms.  Faced with this choice, Chief Tessouat “converted”, was baptized and christened as Paul.  Etienne also “converted”, and both men happily accepted weapons for their tribe – and began a  story of both politics, morals, and conflicting belief systems that spanned their lifetimes.

Etienne, while he had played along to convince the Jesuits, had not changed.  He still performed his tent-shaking ceremonies and other spells and rituals for the people.  Every time the Jesuits returned, it would soon come to light that Etienne had not changed his “heathen” ways.  He became something of an issue for the Jesuits, as his strength as a speaker, his excellent mind, and his skill at swaying the minds of the people was important.  He understood the tenets of Christianity and could have compelling debates with the priests.  However, his own conversions were empty and hollow, potentially undermining their efforts. Not wanting to build ill-will, they recognized his ability to convince others to follow him, and realized that he could either help or harm their cause.  They allowed several “conversions” to Christianity after Etienne “fell into sin”, and continued to provide weapons for a time.  Eventually they labelled him an apostate and refused to help he or Tessouat any longer.

In 1641, the Mohawks overwhelmed the sadly under-manned fort at Kichesipirini, and most of the people there merged with the Christian Weskarini band at Trois Rivieres

led by Sachem Charles Pachirini.  Charles Pachirini was a young Algonquin.  He was loyal to his new Christian faith and was given a fiefdom in Trois Rivieres.  It can easily be imagined that this would have been a promise of safety and security to the Great River Band who had been in a constant state of warfare for most of their lives.  Etienne and Paul Tessouat, however, were thrown out for refusing to convert to Christianity, and went their own way for a short while.

One can only imagine what they were doing during this time, but they were certainly involved in inter-tribal conflicts.  Pigarouiche converted once again, begging forgiveness of the priests, and ended up in Sillery.  He explained that through prayer, he had narrowly escaped death at the hands of Iroquois warriors, and wanted to give himself to God once again.  One can wonder if perhaps he was tired, or missed his people, wanting to feel safe and secure and understanding this was the way to get to that goal.  Surely his exile must have been difficult on him after being such a powerful force in his Tribe.  Once accepted into Sillery, Pigarouiche publically devotes himself heavily to the Church, and the Jesuits often write of his fiery speeches and ability to get people out to prayer.

In our next blog post, we will discuss Etienne’s life in Sillery, and the other forces at work in his life.